Our youngest Granddaughter Louise, has helped me produce todays post, she had been poorly during the night, so was home from school today.
We are joining Cathy's meme: Vase on a Monday
The garden is going through a purple patch at the moment, which we have reflected in the flowers selected. Starting with the Dahlia 'Thomas A. Edison', which was very slow to get started in the spring and is now dominating the raised beds, alongside is the Aster a.n. 'Helen Picton', named after the daughter of Paul Picton, owner of Old Court Nurseries and the Picton Gardens. They are based just over the border from us in Herefordshire and are National Collection holders of Asters.
The vase also contains three flowering stems of an unknown Miscanthus, given to us by a good friend. 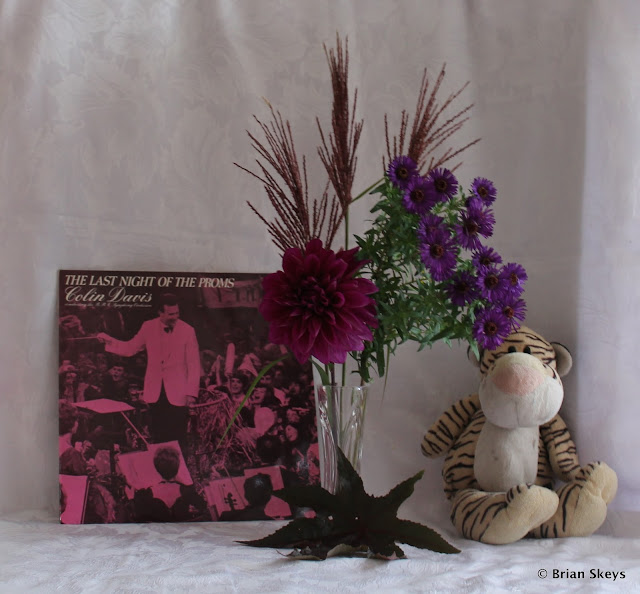 The leaf at the base of the vase is from the Caster Oil plant, Ricinus communis.


The props used today are the purple sleeved LP The Last Night of The Proms, reflecting the fact that we are nearing the last concert from these flowers for this year.
Toby the Tiger is Louise's special soft toy, she was given him by Father Christmas when she visited him on the Severn Valley Railway Santa Special.
He now goes everywhere with her.

Arrangement by Brian and Louise, Photographs by Louise.
Posted by Brian Skeys at 12:42

Email ThisBlogThis!Share to TwitterShare to FacebookShare to Pinterest
Labels: Aster, Dahlia, Miscanthus, Vase on a Monday